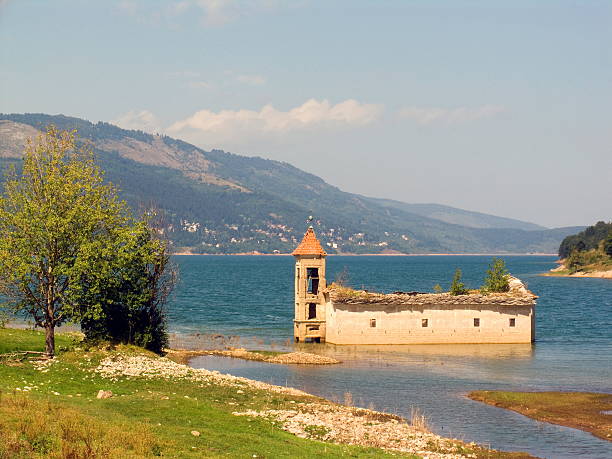 We in Global Transfer Service will show you the largest artificial lake in Macedonia is part of Mavrovo National Park. Due to its elevation (over 1,000 meters, or 3,000 feet), this mountain lake sometimes freezes over in winter. Abundant with the famous trout, Lake Mavrovo also makes for an excellent swimming and boating spot in the summer months. An additional point of interest is the half-submerged church in the middle of the lake.

Mavrovo Lake is situated in the Mavrovo region, in the Mavrovo and Rostuša municipality of the Republic of Macedonia, less than 100 km from Skopje. Abundant with trout, Lake Mavrovo is used for recreational activities such as swimming, boating and fishing during the summer. An additional point of interest is the half-submerged church in the lake. Spreading over an area of about 300 square miles (780 km2), the Mavrovo National Park features deep canyons, snowy peaks and blue lakes combine with dense forests that abound with diverse wildlife. Mavrovo is one of the leading tourist areas in the country along with Ohrid, Prespa, Dojran, Popova Shapka (Shar Planina), Pelister, and Kruševo. It was established in 1949 by a special law passed by the National Assembly of Macedonia. Later the legislation was changed considerably, enforcing a much stricter protection system. According to the new law, the park is divided into three zones: strict nature reserves, managed reserves, and a tourist zone.

Perhaps one of the features that make the Mavrovo National Park so attractive to visitors is its vivid topography. The relief of the park contains three Alpine mountain systems: the Shar, Korab and Bistra mountains. They are exceptionally high, the Shar and Korab, reaching heights of more than 9000 feet (the Korab peak is the highest in Macedonia with its 9100 feet). These tremendous mountains are distinguished by chains of snowy, jagged peaks and broad grassy plateaus below them.

Between the three mountains extends what some call the most beautiful canyon in Europe: the Radika gorge. More than 15 miles (24 km) long, it displays spectacular landscapes. Vertical cliffs higher than 1,000 feet (300 m) rise above the fast, crystal-clear waters of the Radika river. In addition, the park area contains many other interesting natural phenomena—the highest waterfall in the Balkans (with a vertical fall of approximately 400 feet), alpine bogs in the Shar mountains as remnants of the Ice age, rare karst relief (including beautiful caves) in the Bistra mountains, as well as numerous glacial lakes throughout the Alpine zone.