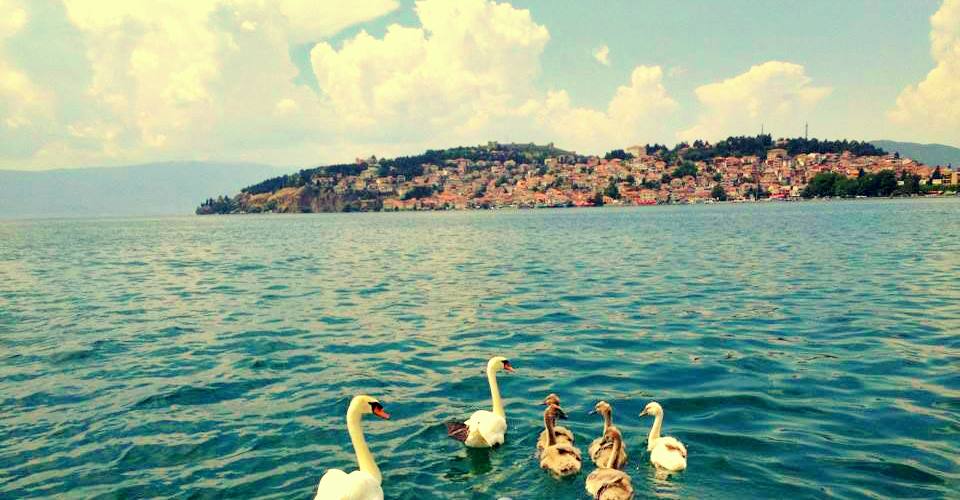 Being the largest and most beautiful out of Macedonia’s three tectonic lakes, Lake Ohrid is about 30 kilometers (18 miles) long and round 288 meters (945 feet) deep. Its astonishingly clean and clear waters, together with the serene stillness of its mountain settings have captivated visitors since prehistoric times. While the lake is filled up by water from three rivers, most of Ohrid’s water comes from another lake – Prespa which is located on the other side of Mountain Galicica. Due to the high elevation, Prespa spills its water down to Ohrid through mountain springs, the most important ones being Ostrovo and Biljana, located near the monastery of St. Naum and Ohrid town, respectively. With its unique flora and fauna characteristic of the tertiary period (2-4 million years ago), Ohrid is one of Europe’s great biological reserves. Most of the lake’s plant and animal species are endemic and unique to Ohrid. The most famous among these are two types of the Ohrid trout, named letnica and belvica. Other unique Ohrid creatures include two types of eel, and the bleak whose scales are used for making the well-known Ohrid pearl. This treasured jewel is produced according to a secret method which was passed on from generation to generation. Sport fishing attracts many passionate fishermen from Macedonia, Europe and even from the world.

Lake Ohrid, straddles the mountainous border between southwestern Macedonia and eastern Albania. It is one of Europe’s deepest and oldest lakes, preserving a unique aquatic ecosystem that is of worldwide importance, with more than 200 endemic species. The importance of the lake was further emphasized when it was declared a World Heritage site by UNESCO in 1979 and when, in 2010, NASA decided to name one of Titan’s lakes after Lake Ohrid. The towns situated at the lakeside are Pogradec in Albania, along with Ohrid and Struga in Macedonia.

The Ohrid and Prespa Lakes belong to a group of Dessaret basins that originated from a geotectonic depression during the Pliocene epoch up to five million years ago on the western side of the Dinaric Alps. Worldwide, there are only a few lakes with similarly remote origins with Lake Baikal and Lake Tanganyika being the most famous. Most other, short-lived lakes have a life span of less than 100,000 years before they are eventually filled up with sediments. It is believed that in the case of Lake Ohrid this process was delayed by its great depth and small sediment input from its filtered spring inflows. Moreover the Ohrid-Korca graben to the south of the lake is still tectonically active and might compensate sedimentation by subduction. In contrast to Lake Ohrid, Lake Prespa is likely to have turned dry several times in its history, as a result of its karstic underground. In 2008, Macedonian media reported that international experts will be researching the lake in order to determine its age…